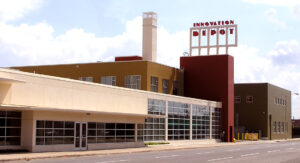 Founded through a public-private partnership in 1987, Innovation Depot is a non-profit 501(c)(3) tech accelerator and incubator in Birmingham, Alabama. The Depot is located at 1500 1st Ave N in a 140,000 square foot building that previously served as a Sears department store. When it opened in 1941, the facility was hailed as the largest single-floor department store in the United States. Innovation Depot purchased and renovated the building in 2006 and opened its doors to tenants in 2007. Currently, The Depot is the largest nonprofit tech incubator building in the country.

Innovation Depot is home to approximately 110 startup companies that employ more than 1,500 individuals. For 33 years, The Depot has worked to propel economic growth and job creation in the region by supporting the development of emerging technology, biotechnology, and life science businesses. In addition to offering business incubation space, The Depot runs three signature programs focused on helping founders successfully envision, launch, and scale up their companies.

The name Innovation Depot was chosen to reflect its proximity to Birmingham’s Railroad Reservation, the “incubator” of industrial development in the late 19th century. The Depot serves as the heartbeat of Birmingham’s tech district, The Switch.